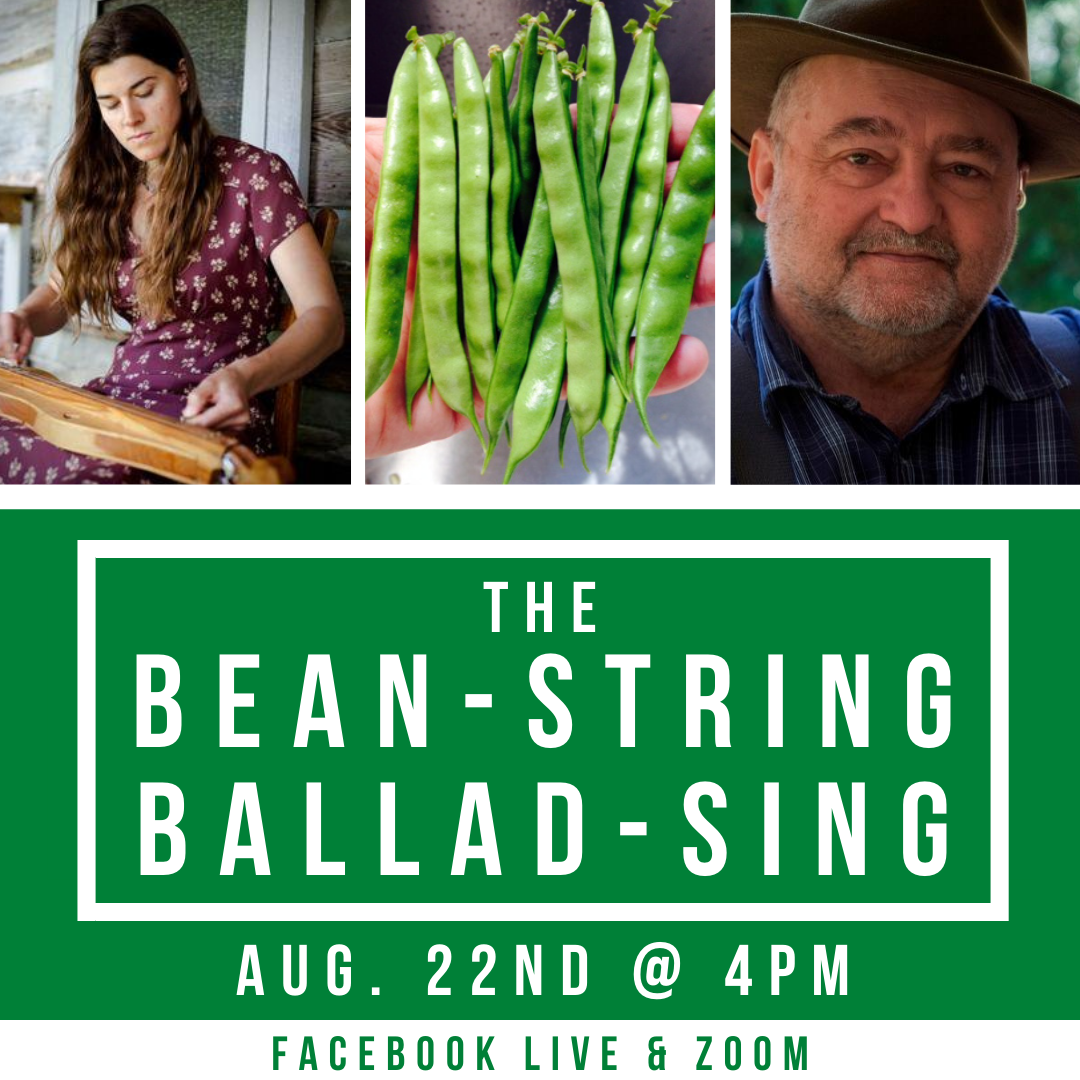 View On Facebook
*Update*
A big thanks to everyone who tuned in to our first Bean-String Ballad-Sing!  You may re-watch our event on Facebook by following the "View on Facebook" button above.

Join us via Zoom and Facebook LIVE as we celebrate traditional foodways and unaccompanied ballad singing with celebrated singers and tradition-keepers Bobby McMillon, Susan Pepper, and host William Ritter.
​
The Bean-String Ballad-Sing hearkens back to music shared in the intimacy of front porches, kitchens, and living rooms. It will provide an opportunity for attendees to spend time in community, listen to ancient, haunting, and beautiful ballads, learn about the context of these songs (while perhaps participating in that context), and all around have a memorable evening.

Initially this event would have been in-person. We would have gathered together in the garden, strung the year's beans while listening to this music and conversation, and then we would have had a meal. Unfortunately due to the realities of COVID-19, this in-person experience has been postponed until next summer. Despite that disappointment, we're so excited to be able to offer this online version of our event. We encourage you to snap beans and/or prepare supper at home while tuning in. In the group chat, we hope you'll share some memories about the way that song and food preparation have come together in your own experience.
​
Again, SAVE THE DATE for the Bean String Ballad Sing! August 22nd, from 4-6pm. Also available on Facebook LIVE.

Robert Lynn “Bobby” McMillon, a North Carolina Folk Heritage Award recipient, was heir to numerous strands of Appalachian culture. From his father’s family in Cocke County, Tennessee, he learned Primitive Baptist hymns and traditional stories and ballads. From his mother’s people in Yancy and Mitchell Counties, North Carolina, he heard “booger tales, haint tales,” and legends about the murder of a relative named Charlie Silver. In Caldwell County, he went to school with relatives of Tom Dula, learned their family stories, and heard ballads, gospel songs, and Carter family recordings. “The real storytelling,” Bobby says, “was so intertwined that a bear tale or a fish tale or a witch tale or a tale of some history that had really happened—a family tale—they were all equally believable.”

He was always drawn to old songs and stories, but as a teenager he discovered the Frank C. Brown Collection of North Carolina Folklore in the Lenoir Public Library and got a glimpse of the historical background and significance of the things he knew. This inspired an enthusiasm for folklore documentation that has made him an invaluable resource to his community. By the age of seventeen, he had begun taping and interviewing family members, neighbors, and friends who knew old songs and stories. Even before that, he had begun to develop his skills as a performer. He and his cousins “would get together in the evenings” and “just tell everything in the world that we had heard.”
​
Bobby McMillon has performed throughout the state as a singer and storyteller. He has appeared at events such as the Smithsonian’s Festival of American Folklife, the A. P. Carter Memorial Festival, national storytelling conferences, and the Festival for the Eno. For a decade he served public schools as part of the Artist in the Schools and Visiting Artist programs. Filmmaker Tom Davenport produced a film, The Ballad of Frankie Silver, that features Bobby singing the ballad and telling stories passed down in his family and community about the murder.

Because these songs and tales have deep roots in his own family and experience, Bobby has a passion for them and for sharing them. “Eventually, I began to realize,” he says “that if I didn’t perform the songs I was learning, most of the repertories of the people I learned from would be lost because they didn’t have family members of their own to hand them down to.” His greatest gift is his rare ability to convey to listeners a feeling for the world from which the stories come.

Susan Pepper is a grassroots musician, performer and educator dedicated to sharing heartfelt songs old and new and building community through song. Her repertoire and performances are informed by her research with older mountain musicians and community members. Susan's dynamic performances include unaccompanied ballads as well as songs with banjo, dulcimer and guitar. Most of her songs of tradition come from her work researching and learning from elders in western North Carolina. Above all, Susan loves to sing, and her voice naturally fits with the old style of mountain singing. She is also a songwriter, and her original music is inspired by tradition as well as stories of people past and present. An awareness of nature and the sacred that surrounds us infuses her compositions.

Susan has taught ballad workshops at the John C. Campbell Folk School and Youth Traditional Song Weekend  in Becket, MA. She has performed at the Bascom Lamar Lunsford Festival Ballad Swap (Mars Hill, NC), Mountain Heritage Festival (Cullowhee, NC), Appalachian Festival (Cincinnati, OH), Appalachian State University (Boone, NC) and the Library of Congress.
​
Her solo debut Hollerin Girl (2015) features traditional ballads and folks songs and originals. She has produced several CDs including On the Threshold of a Dream featuring the unaccompanied singing of traditional NC singers Pearl Hicks, Rosa Hicks, Zora Walker and Hazel Rhymer as well as Alleghany Jammin', a promotional CD for the Junior Appalachian Musicians Program in Sparta, NC which she directed for 2 years. Susan has a Master's Degree in Appalachian Studies from Appalachian State University and wrote a thesis on NC ballad singers A Whistling Girl and a Crowing Hen Always Come to Some Bad End. Susan has led workshops at community centers, elementary schools, and art centers locally and regionally; she has also taught Appalachian Studies at the college level. 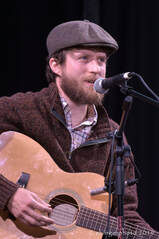 William  is a native of Bakersville, NC, and an alum of Western Carolina University.  He graduated with a degree in Technical Theatre, but spent most of his time in school studying the musical folk traditions of Western North Carolina.  In 2017, William  received his MA in Appalachian Culture and Music from  Appalachian State University.  William plays banjo, fiddle, guitar, and other "string-ed things." He is particularly interested in old mountain folkways, foodways,  humor--ever eager to swap lies, half-truths, tales and seeds.  William runs Song to Seed, and serves as music director for the Happy Valley Fiddlers Convention.  Recently, he has been performing regularly with Asheville musician, Tim McWilliams.  This year William was added to the Blue Ridge National Heritage Area Traditional Artist Directory, and also received the 2019-2020 In These Mountains Apprenticeship grant to study under renown ballad singer and storyteller Bobby McMillon. 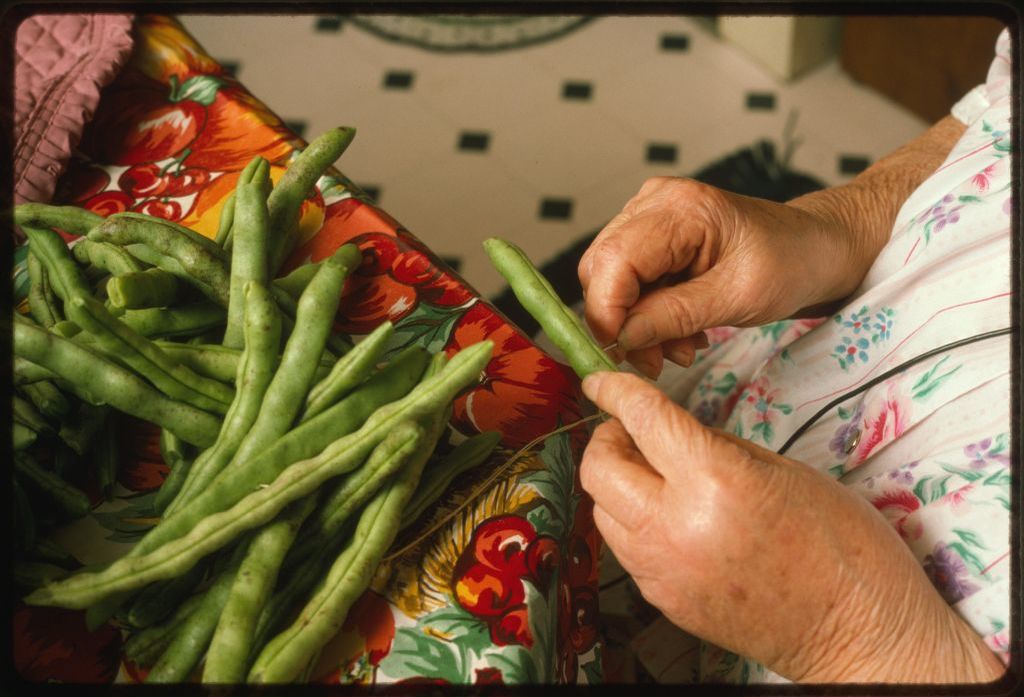